Reno Apartment Investment Returns | Where do they come from ?

Posted by: Morgan Walsh
Multi-Family Specialist
775 336 4646
mwalsh@naialliance.com
Morgan Walsh is a commercial broker with 20 years experience in investment sales, multifamily and specialty sales, representing buyers and sellers, institutional and private developers in market rate apartment sales, mixed-use residential development and the development of affordable housing projects.
Apartment buyers today will tell you they expect returns to come from current cash flow and appreciation in the range of 8 to 11% per annum. But do the assets really deliver that in a normal market?

Owners of apartments in Washoe County built before 1985 have held their asset on average more than 8 years. Almost half the owners have held more than 10 years. The median holding period for product built after 1984 is now 5 years. Nearly 25% who own the newer product have owned fewer than 3 years. The result is that 80% of the assets currently held did not change hands when owners might have exploited the benefits of extraordinary appreciation during the recent period of historic low cap rates. The remaining 20% of assets were acquired at a cap rate owners may not see again for years.

Historically, apartment appreciation tracks rent growth. From May, 1998 through May, 2008 median monthly rent in Washoe County rose from $696 to $910, a nominal compounded annual rate of 3.5%. But adjusting for inflation using the Western regional index of CPI (All Items/ Urban Wage Earners) rents actually declined slightly in real dollars. (Figure 1) To have kept pace with inflation, median monthly rent should have reached $925 in 2008. The cap rate compression during the recent boom was driven by rates, not rents. Nearly everyone in the industry expects cap rates to be higher within the investment horizon of most owners, because the cost of financing is expected to rise at a compound rate significantly higher than nominal rents. Clearly the winners who disposed of assets during the boom reaped comparatively high rates of appreciation, and for them compounded assets returns were in some cases above 10%. In the past 18 months, 14 sales of properties above 50 units in Washoe County showed a median annual adjusted appreciation of 6% for units with a median age of 31 years, held for 7 years and bringing a price of $112 per square foot. One property was sold at a loss.

Buyers say they purchase apartment buildings to obtain cash flow but the skill set required to maximize cash flow prudently over time is very rare. Buying right in a buyer’s market gives an immediate yield advantage. But the problem buyers find immediately in trying to buy right is the sheer volume of capital chasing deals and the skepticism of sellers trained to expect yesterday’s low cap rate. For product under third-party management, the working assumptions commonly found are that rents will rise 3% per year against expenses rising at 2%, with cash on cash return expanding at just over 1% per year with normal leverage. Achieving an average monthly gross rent of $925 per unit represents a 6% cash on cash return with normal leverage at current rates, without regard to a capital improvement program put in place to preserve rentability. Owners may try to force gains by cost effective renovations in popular submarkets. Others reduce expenses, often jeopardizing the units’ future rentability for current income. Ultimately, the most influential factors driving revenue and expenses may be beyond an owner’s control—net regional immigration by retirees and other tax refugees, inflation, ad valorem tax advantages and regulations that inhibit new home ownership for some and subsidize it for others. Of all the sources of yield to an apartment owner, cash flow is the most difficult to forecast with confidence, especially as operating expenses begin to widely reflect the fuel cost wild card.

Frequently overlooked is the most effective and predictable source of investment return for apartment owners—the forced savings of principal reduction through amortization. Over a typical holding period, the median equity build-up is 5% per year in real dollars. Ironically, the decision to achieve this yield is in the hands of the lender. 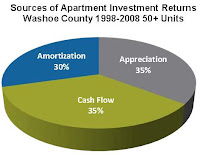 Where, then, do apartment returns really come from? (Figure 2) Except in extraordinary markets, returns come fairly equally from cash flow, appreciation and amortization.

Email ThisBlogThis!Share to TwitterShare to FacebookShare to Pinterest
Specialty: Multi-Family