Many in northern Nevada are starting to feel that most industries are beginning to experience rebounds. The office property market in the area is experiencing the same. Cautious optimism in the office market is prevailing, and there are a number of reasons this is the case.

With asking rents and interest rates remaining low coupled with the quantities of available space on the market, brokers, investors and developers continue to feel that this will only benefit both new, and existing, tenants in the area.

There are some key areas that are experiencing near “back to normal” market trends. The downtown market is a highly sought after environment, as is the Meadowood area. In both of these hot sub-markets, tenants can be expected to pay in the $2.00/sqft range for high-quality Class A space, which is close to where prices were before the recession in the area.

This is due in large part to the demand for .....  Click here to read the entire piece from NAI Alliance.

Another story on growth in the area. Always a good topic to write about.

Now the company has arrived. With their official grand opening yesterday, VGT, a Tennessee-based gaming technology company, announced that they're ready to continue their growth. More jobs to northern Nevada, more good news. VGT has already brought 40 jobs to the area and have an eye on adding close to 30 more professional positions.

The Company cited the depth of talent in the Reno market was key to their expansion. This is just another in a series of stories of companies who are seeing the value of northern Nevada. We're all in for the revitalization of the area, and signs are pointing towards the positive - new businesses, expanding businesses, job growth.

With the collective help of EDAWN and other organizations, Spring in northern Nevada is happening.

The RGJ published a great article here, and you can see the piece KRNV News 4 did on yesterday's grand opening here.

Another step in the right direction for northern Nevada as Zuvo Warter is moving its headquarters to the area. Currently with a staff of 4, the company plans to increase its employee base to 20-25 by the end of the year.

Zuvo is another company that has sprung up and is committed to long-term growth in Nevada. The company is currently in the process of moving its headquarters from Mountain View, CA to the area, and expects to be operational in April.

Michael Nevis, Senior Vice President/Principal of the NAI Alliance Industrial Properties Group, represented the landlord in the transaction - MEPT Southwest Commerce - to get Zuvo into their new space at 895 E. Patriot Boulevard in Reno.

Zuvo Water LLC is a global innovator of chemical-free water products. Zuvo Water’s product portfolio is based on a patented technology platform that reproduces the photo-oxidation process that naturally occurs in the environment.

You can read a detailed article, courtesy of the NNBW, by clicking here. The RGJ also published a story on this news.

From Smartphones to Tablets - The new web experience

In our business, and in many industries, tablets are the easiest alternative to the PC and a sexier presentation vehicle. And it appears, we're not alone. No longer just a "bigger smartphone," tablets are proving to have a much bigger impact on our collective web experience. The growth of web engagement from smartphones to tablets is on a considerable rise.

The share of website visits from tablets grew approximately 10 times faster than the rate of smartphones within two years of market introduction and grew more than 300% in the last year. This rapid growth is driven by both higher tablet shipments and disproportionately higher website visits per tablet. Tablets’ share of website traffic will exceed smartphone traffic by early 2013 and reach 10% of total website traffic in early 2014. This all according to Adobe Digital Index.

The tablet will simplify administrative chores for teachers, enable a student's participation more readily in discussions, and allow students to complete coursework at their own pace while drawing upon online research resources that teacher's can personally select. In addition, publishers can update students' textbooks almost instantly, which will keep content as relevant as possible.

While we are all tied to our smartphones for what we need in the moment, the tablet revolution is more than apparent in our daily lives as an extremely mobile alternative to a conventional PC or smartphone for our web experience. Soon, we will all have something new to be tethered to, if we're not already...

Built in 1913 as the Gibbons Mansion, the home was purchased by Nevada lawyer, judge, and politician Pat McCarran in 1921. His law practice thrived in the days of the “Reno Cure” for troublesome marriages. He served in congress from 1933 to 1954. The property passed through other owners in the years following McCarran’s death in 1954. Now restored, it houses offices for a number of professionals and businesses in the area.

In addition to brokering the sale of the Mansion, the NAI Office Properties Group retained the Exclusive Lease Listing from the new owners, McCarran Mansion, LLC. 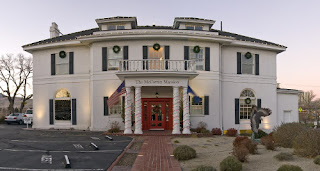 One of the best logistics hubs in the west, the Tahoe Reno Industrial Center (TRIC), will soon be receiving additional van pool service for employers and employees to help make the 9 mile east trip from Reno more convenient.  Currently there are three van pools running, mainly for GSI Commerce, a subsidiary of eBay, with the hopes of increasing after talks with other employers in the center.

While discussions regarding bus transportation to TRIC from the Reno-Sparks area have been on-going for some time, TRIC is located in 3 counties - Washoe, Lyon, and Storey - meaning that there is no single transportation governing board.  EDAWN, the RTC, and businesses currently operating in TRIC had discussed adding bus service from Reno.  However, RTC is unable to spend tax money to pay for services outside of Washoe County.

RTC's van pool program, started in 2005, looks like the perfect solution for employees working at businesses in TRIC.  There are a number of advantages for both the employers and employees by utilizing the van pool service, including payroll tax benefits as well as avoiding the obvious vehicle gas, maintenance, and repair fees associated with a commute.

So as the massive 107,000 acre park with 30,000 acres of potential industrial development continues to grow through the great work of EDAWN and developers in the community, there is good news for the hundreds of commuters who are looking to cut back on transportation, and convenience, costs.

You can read the full story by the Northern Nevada Business Weekly by clicking here.  For more information on TRIC, visit their website.
No comments:

Northern Nevada is a Leader in Geothermal Energy Development, But....

There have been a few articles published recently touting Nevada as a geothermal mecca.  In fact, there are 75 geothermal projects under development in Nevada, which is more than twice the amount of the second leading state, California, according to the Northern Nevada Business Weekly (NNBW).

The Great Basin Center for Geothermal Energy at the University of Nevada, Reno has been a leader in understanding the geology of the region covering most of Nevada and parts of Utah, Oregon and California.  The University of Nevada maintains the National Geothermal Academy, an eight-week summer course attended by students, professors, and professionals around the world, both according to the Reno Gazette Journal.

NV Energy currently has 21 deals in place to purchase power from geothermal plants in the state, with a number of those driven by a state requirement for NV Energy to purchase at least 18% of its power needs from renewable sources, according to NNBW.

However, geothermal energy comes at a price.  Developing geothermal power is a high-risk, high-cost business. Developers spend millions of dollars drilling wells in the hope of finding underground reservoirs of hot water that can be tapped to create steam to drive electricity-generating turbines.

In that sense, the geothermal industry is very much like the oil and gas industries. However, geothermal energy can't be shipped around the world in the way that oil and gas can.  Geothermal energy must be pushed to an electrical grid through agreements to sell the power to a utility and continue development.  Also, there is no payoff in hitting dry geothermal wells, whereas a single "live" oil well can pay off a number of "misses" based on the petroleum prices it can bring.

So, while we have tremendous geological resources here in Nevada, we need investment and legislative commitment to continue our state's growth in this dependable, sustainable source of power.

You can read further, in-depth, pieces by going to the Reno Gazette Journal or the Northern Nevada Business Weekly.
No comments: